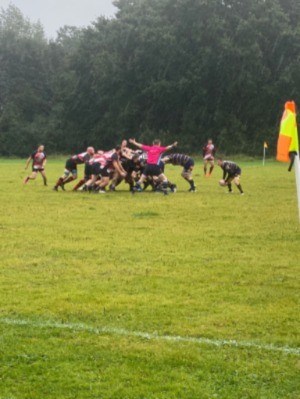 The annual Mike Blow Memorial Shield match was played between Isle of Wight and Fareham Heathens to celebrate the life of a stalwart of both clubs. The islanders travelled away to the league leaders with a much changed team from the defeat by Portsmouth II, but were buoyed by the return of Evan Toms from a stint at university.

The game was dominated by the blustery and torrential rain but the players from both sides remained good humoured throughout the game. Initial pressure from kickoff and some strong pressure from the IW forwards resulted in penalties for the Island close to the Fareham posts, but they  were unable to convert pressure into points and missed the resulting shots at goal. Subsequently, a turnover and strong clearance allowed Fareham to exploit an overlap and lack of communication from IW down the blindside, and finish off with some crisp handling. The Island responded almost immediately with a great combined effort from the forward pack crashing over close to the posts. George Huish added the conversion.

The scrum proved to be a thorn in Heathens side, with the front row of stalwart Martin Newnham, backrow convert Ian Bennett and powerful prop Ricky Keyes proving too powerful and winning multiple scrums against the head. However, injury to Luke Blackman proved to be a key turning point, removing a key IW ballcarrier and giving Fareham the ascendancy in the line out.

Fareham managed to score two quick tries after half time. Strong defence from Tom Marriott, George Huish and Dave Blackman managed to stem the tide and nullify any further pressure from the home attack. Fountain Inn man of the match James Webster covered every inch of the pitch and helped inspire a rally from the island in the last 20 minutes. Sustained pressure in the Heathens half yielded a penalty from George Huish, although IW were unable to score again despite finishing the game on the attack.

The final score was 19-10, though IW should take pride in their performance especially against likely title challengers Heathens. The 1st XV will take a much needed rest next week before playing Overton at home on 16 Oct. In the meantime, the 2nd XV welcome Alresford to Wootton Rec this Saturday, with a 3 pm kickoff.